Get 0.05 TON 💎
Download A New Simple Percent (ANewSimplePercent-1.3.1.zip release) for world of warcraft version 9.0.1?
Download link will appear in 5 seconds 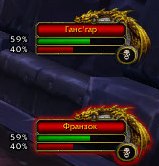 This is a the good old Simple Percent addon fork. I've started it in 2014 for my own needs and now decided to share it with a community, since the original addon is completely unusable with current game version.

This addon is for people who want to see target's absolute health and percentage same time with blizzard's original player and target frames.

Someone could ask, why to use this addon now, when default frames can display both absolute and percentage values together. The reasons are:

Syntax: /simplepercent <player or target or focus or boss> <health or mana>

Syntax: /simplepercent <player or target or focus or boss or all> font <default or number>

What's new in this fork:

I will not do useless "updated TOC" patches just to show that addon supports fresh game update. As long as current game version, posted in "What's new" section, is latest, you can be sure, that the last version of the addon will work, even if it's file version seems outdated.