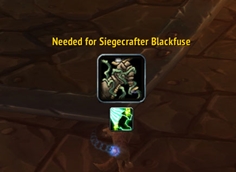 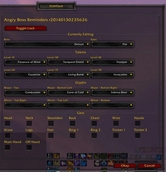 This addon was written by the guild Angry (US-Illidan) to help raiders switch to the proper talents and gear for each boss during a raid. You can configure the particular talents/gear that you'd like the addon to watch for, on a per-boss basis. As you arrive in each boss's room, you'll be reminded about any talents/gear that need to be changed, and you can simply click on the reminder icon(s) to install/equip automatically. Note that due to the map API changes made during Legion, the reminders for a given boss won't be triggered until you either mouseover or target the boss, or someone else in your raid targets the boss.

To bring up ABR's configuration, bring up the game's Interface menu and go to Addons -> Angry Boss Reminders, or you can simply use the "/abr" command.

Towards the top of the configuration screen, you will find a Boss menu that contains a "Default" item, plus each boss in the current raiding tier. To the right of the Boss menu is a Spec menu. The Spec menu controls which spec's talent/gear slots you're currently editing. By default, the Spec menu will be set to whatever spec you are currently. If you select a different spec from the menu, it will allow you to edit the talents/gear slots for that other spec without having to re-spec. (Note: ABR does not remind you to change specs for bosses, it only stores a separate profile of talents/gear for each of your specs. Reminders are always checked against whatever spec you currently are.)

First, for any given spec, you'll want to configure your talent/gear slots for the "Default" boss. Set your talent slots to whatever talents you would use most of the time. If certain talent slots don't affect raiding at all, you could just leave those set to the blank slot, and ABR will then ignore them completely. Next, pick individual bosses from the Boss menu, and then select any talents that are different for that boss, compared to what you set in the "Default". For slots that you leave blank in the individual bosses, ABR will refer back to the "Default". This means you will normally end up leaving most slots blank for individual bosses.

Gear works similarly to talents. You can specify an equipment set (from the game's builtin Equipment Manager) you want to have equipped for a given boss, or you can specify individual items by dragging those items into the appropriate individual gear slots, either in the "Default", or a per-boss profile, depending on the desired effect. As with talents, ABR will check the per-boss profile first – if it's blank, then it'll refer back to the "Default" profile, and if both are blank, it will ignore them entirely. In addition to dragging items into the individual gear slots, you can click on an empty gear slot to insert whatever you're currently wearing in that slot. To clear an occupied individual gear slot, click on it.

Next, either push the "Toggle Lock" button from within the ABR config window, or use the "/abr lock" command. This will let you configure the location and the size of the reminder icon, by dragging the icon itself or the size adjuster at the bottom right of it. After you're done with that, push "Toggle Lock" or use "/abr lock" again to lock it in place and hide it from view.

After you've configured ABR, it will begin reminding you to adjust your talents/gear as you or a raid member target the boss. The reminder will consist of a short message telling you which boss has been been detected, and icons for each of the talents/gear that you should have for that boss, but are currently missing. A left-click on an icon will immediately install that talent or equip that gear, while a right-click will dismiss that reminder for the time being (until you reload UI or see a different boss). You can also set a key binding in the game's keybindings (in the section "Angry Boss Reminders") which will be the equivalent of left-clicking on the large icon. If you enter combat with any reminders still showing, they'll be suppressed as long as you remain in combat.

The "/abr help" command will list all console commands.

The "/abr resetposition" command will reset the position of the reminder icon back to the default.