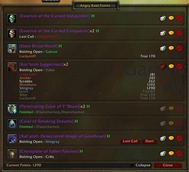 This addon was written by the guild Angry (US-Illidan) to handle bidding on items in a DKP-like system. It is meant to be used when your master looter is running AngryRaidPoints and is of no use on its own. It aims to provide a convenient GUI interface to bid on items that are being bid out by AngryRaidPoints.

The loot window will automatically pop up when new loot is available (you can also toggle it with "/arpc toggle" or set a keybind for it in the game keybindings). In this window, each item will have 3 icon buttons to its right: a dice (representing) main spec, a coin (representing off-spec), and a circle-with-a-cross (for removing yourself from the bid list if you change your mind). You can add or remove yourself from the bid list up until the time at which bidding begins.

When bidding does begin and it's your turn to bid, a pop-up box will come up asking for your bid. The pop-up accepts these formats for your bid: the numeric amount you wish to bid, or "+X" to bid X more than the previous bidder, after you've typed in your bid, push the "Send" button. To pass and not bid on the item, use the "Pass" button.. You can use the "Dismiss" button to get rid of the pop-up window for the time being. After dismissing, you'd later push the "Bid" button for that item in ARPC's loot list to bring it the box back up when you're ready to bid or pass.

If you're the ARP bid handler for a given item, you'll also have "Last Call", "Start", and "Remind" buttons appear on that item's line, when applicable. This avoids the need to bring up ARP's window at all, if you're not the master looter.