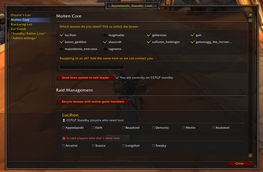 If you are using CEPGP to have players on standby, this addon will allow you see where standby players could be swapped into your raid for specific bosses.

It lets everybody in your raid/on standby mark which bosses they need loot from, and then displays this information to the raid leader.

To open the addon, type /as