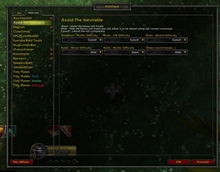 Get
Download Avoid the Inevitable (AvoidTheInevitable-1.0 release) for world of warcraft version 6.2.4?

Tired of having to dismiss the bonus roll each time you kill a Mythic Dungeon boss ?

Avoid the Inevitable takes care of that for you. Just install it and choose a mode for each instance type and difficulty, and you won't be annoyed again, regardless of the raid tier or currency used for the roll.

The addon currently has 3 modes for each instance type/difficulty :

These modes are individually set for each instance type and difficulty among :