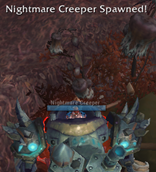 Plays a sound and displays a message whenever a Withered Hungerer or Nightmare Creeper spawns from herbing Starlight Rose, Aethril, or Dreamleaf. I often find myself with a long train of mobs following me while I'm doing my herb picking so I made this to alert me when I need to stop and kill one of the herb dropping mobs.

REQUIRES Enemy Nameplates to be enabled.

This addon is now capable of detecting the Frenzied Fox but to do so you must use the following command in chat /herbalert fox, use it once to turn it on and again when you are ready to turn it off.   The slash command will turn itself off on logout so must be re-entered in subsequent logins if you wish to track the fox again. Another way is to hit escape and got to Interface -> Addons -> BartrubyHerbMobAlert and toggling all three options on under the Fox Options section.  Neither of these methods can be done in combat and it is only necessary to enable them if you want to detect the Frenzied Fox.

A small caveat, there is mostly no way to tell if a mob that has spawned is yours or someone else's except if it's already tapped by the opposite faction when you come across the mob it shouldn't trigger an alert.  This shouldn't be too much of an issue depending on how your nameplates are set up but will be more noticeable with the above fox detection enabled.  Any fox within nameplate range will be detected regardless of who spawned it, which may be an advantage for you since foxes are free for all.