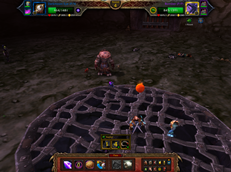 Battle Pet Battle UI Tweaks is a collection of quality-of-life improvements for the pet battle UI.

Each of these tweaks can be turned on or off:

Round Counter: Display the number of the current round in the ‘Vs’ circle at the top of the battle UI.

Current Stats: Display the health percentage, power and speed of frontline pets beneath their health bars.

Enemy Abilities: Display enemy abilities and their cooldown at the bottom of the battle UI.