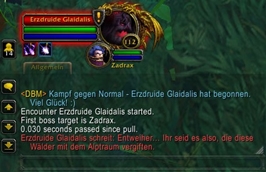 Whenever a boss encounter starts, this addon outputs the following lines in your chat frame:

This helps you find out who pulled a boss, because that player is usually instantly targeted by the boss for a split second before a tank gains aggro. Does it always work? Probably not. A hunter might use misdirection, or a boss might simply take a few seconds to become active, after which it is useless to see who the first target is. But oftentimes it gives you a fair idea who the idiot is who always pulls 1 second early, before the DBM timer runs out.

This very simple addon consists only of about 20 lines of code and thus will probably never end up abandoned because it can be updated so easily by anyone.