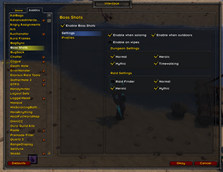 Boss Shots automates taking a screenshot after an encounter.  It prints some information about the kill or wipe in the chat window, so that this info ends up in the screenshot.   The options allow you decide the type of encounter for which screenshots are taken.

I wrote this after looking over my old screenshots, and realizing how that's the only record I have leftover from "the good old days".  Old logs don't work anymore, and digging through old chat logs doesn't really bring back the memories either.  As good as old screenshots are, it's often hard to tell from the shot whether this was after a boss kill, a wipe, or a trash pack, and so on, and who was there.  Hopefully, Boss Shots fixes all of this.

There used to be an add-on called MultiShot that did this and more, but it used hard-coded boss ids and has not worked since Mists.  Boss Shots uses a different approach, and will work on any boss in any dungeon, raid, or even world content.  And future bosses should be supported with no update needed to the add-on.