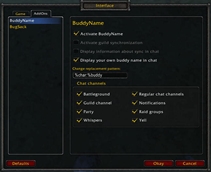 This addon gives you the possibility to add names to other peoples chars. You will then see these names behind the char names in chats (guild, party, raid, whispers, battlegound), making it somewhat easier and more personal to communicate with your mates. Also, never again forget who you're talking to! Especially useful in larger guilds or raid groups.

If you find any errors, please leave a comment below, or, even better, open a ticket on curseforge.com. Also, in most cases an error code will be printed to the chat window. It would help a lot if you tell me this code.

v0.8:
Got this working again with connected realms and Draenor addon. On the other hand, also removed guild synchronization. Code was working good, but very hard to maintain. Also, no idea if a significant number of people was ever using guild synchro, thus possibly not worth the effort.