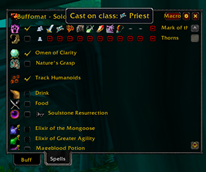 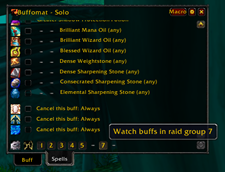 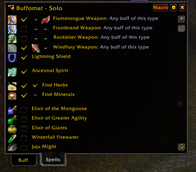 The original Buff’o’mat addon is now abandoned. This addon is a continued effort.

Buffomat Classic is compatible with Classic and TBC Classic, see the downloads section. All files are identical other than TOC file with the UI version. Also TBC version has the different addon name, it is ‘BuffomatClassicTBC’. Version numbers follow Year.Month.Count scheme.

Buff’o’mat is a semi-automatic buff, self-buff and resurrection system. It will make life of buffing classes easy. But also Buffomat is great for non-buffing classes to maintain weapon enchants, consumables and elixir buffs. For example, for Shamans it will reapply weapon enchants and lightning shield; For Rogues it will reapply poisons and elixirs; For Warriors it would reapply elixirs and Battle Shout (if you have 10 rage) useful when chain-pulling while leveling or raiding. Moreover, Buffomat can cancel undesirable buffs, for example rage tanks would not like to ever be power word shielded, or buffed spirit and intellect – there are checkboxes for it!

The mod requires 1 macro slot to operate. You can drag the macro out to your action bars, or you can assign a shortcut key in Key Bindings → Other, or you can keep clicking the cast button in the main addon window. Choose which buffs must be active on the group (or yourself). Have a reminder to reapply the buff, a reminder to resurrect the dead, and other useful reminders like removing your AD trinket or the Carrot on a stick!

Buffomat allows you to include or/and exclude currently selected group target — for this click a party member and then click the force cast or exclude button. Force cast will watch additional targets to buff. Exclude will remove them from the buff candidates, and thus never buff. The settings of force cast and exclude are saved per character.