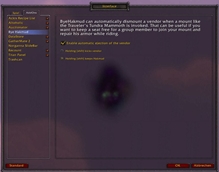 Because in the rush of a raid it's to fiddly to use Blizzards widget to boot a vendor off the mount.
The Traveller's Tundra Mammoth or Grand Expedition Yak has two valuable special features:
– a vendor with repair capabilties
– can carry group members as passenger
The repairing vendor can be used even while riding. Thus it is very convenient for a group member to join your mount for a ride and have his armor repaired along the way to the next mob group. So what you really want is a mount with one free seat and the repairing vendor only. This addon kind of converts it into that.

Just call forth your Traveller's Tundra Mammoth or Grand Expedition Yak as usual. When the vendors materialize ByeHakmud kicks off the non-repairing one immediately. There's no further interaction necessary. Your mount is ready to be joined by a group member.

You can override the automatic ejection if you want to keep both vendors by way of exception. Cast the spell to invoke the mount as usual but then keep the <shift> key pressed until the spell has completed and both vendors have settled.
Note that you can configure ByHakmud to work the other way round so that the vendor is ejected only when you keep <shift> pressed.

There are two ways to configure ByeHakmud. You can either use a dialog or type in slash commands in your chat window.