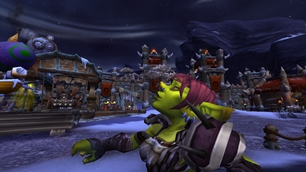 This addon literally does one thing: it hides the "Screen Captured" message that pops up when you take a screenshot. It hides it both on your screen and in the chat window.

If you want to toggle it on/off you'll need to do so manually through the Game Menu>Addons controls in-game; it has no UI or fancy buttons.

"Why is this worth making an addon?"

Short answer: Because Blizz hasn't fixed it yet.

Long answer: Before the S.E.L.F.I.E. Camera this wasn't an issue because if you took a screenshot of Warcraft's wonderful in-game scenery you'd usually have the UI off and this message would be hidden anyway and very, very rarely came up in screenshots at all. Well, the Camera doesn't hide it for us, at least not if you take two in a row, so if you're trigger-happy with your shutter finger you end up with "Screen Captured" projected onto your character's beautiful newly-modeled face.

This addon is a result of a helpful DIY answer to me asking on the Warcraft forums if it was even possible. I've been using it myself for 3 months now but seeing everyone posting screenshots for Blizzard's Scavenger Hunt sweepstakes with "Screen Captured" in the middle of the shot is breaking my heart, so I thought I'd share.

If this one-line addon breaks for some reason I will not know how to fix it, I'm only posting this because I still don't see one like it on Curse. If you have an addon or UI issue I recommend asking more tech-savvy people. You can visit Warcraft's UI and Macro forum here: http://us.battle.net/wow/en/forum/1011693/