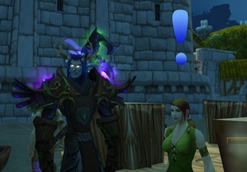 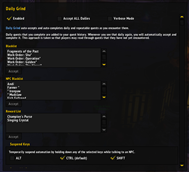 What the heck does this addon do?

Daily Grind auto-accepts/completes dailies after you've encountered them at least once by keeping a history. This history is kept across all characters, so even your alts will gain the benefit of your main's questing.

Type /dailygrind or /dg to bring up configuration and help.

Aren't there lots of quest addons? Why write another one?

For months, I'd been looking for an addon that would:

As I hadn't found an addon that met all of these criteria, I decided to write my own. Enter: Daily Grind

Cool. So how does it work?

Daily Grind starts out dumb. Every time you complete a daily, it records the name of that daily in a quest history. The next time you encounter that daily, Daily Grind auto-accepts and auto-completes it for you. I took this approach for two reasons:

By clicking just once on an NPC, Daily Grind will attempt to accept and complete all daily quests on that NPC at once. The addon will even auto-accept daily quests shared by other players. If your log is full, it will stop trying to accept quests until your log has room.

Note that, by "dailies," I also mean weekly, holiday, and other repeatable quests; basically anything where the quest icon is a blue exclamation point.

Neat! What else can it do?

Holding the CTRL (default) key while speaking to an NPC will suspend Daily Grind's automation features until you release the key. You may also change this key to ALT or SHIFT in the options panel.

This option was added in case you wish to skip even the first reading of a daily quest and just get right to it. Quests will still be added to your history, so if you disable this option later, you won't have to click your way through quests you've already done.

The Reward List is for dailies that offer a choice of multiple rewards. You may add the names of your preferred items to this list in the configuration screen, and when you encounter a quest with multiple reward choices (such as the Argent Tournament favorite, "Threat From Above"), Daily Grind will look through your Reward List for an item that matches one of the available rewards and select it. If more than one match is found, it will inform you which items match and let you choose manually. Item names must have exact punctuation but are not case-sensitive. You may also use * as a wildcard.

If you want to ignore certain quests for whatever reason, you may add them to the Blacklist. You may add quest names either through the configuration screen or by command line. Quest titles must have exact punctuation but are not case-sensitive. You may also use * as a wildcard.

You can also ignore all daily quests an NPC might give out. This is helpful if the set of quests on a given NPC varies from day to day. You may add NPC names either through the configuration screen or by command line. NPC names must have exact punctuation but are not case-sensitive. You may also use * as a wildcard.

Keys can be bound in the normal keybinding interface for toggling the enabled/disabled state of DailyGrind. This is handy for quickly turning the automation features on or off, and any quests completed while automation is disabled will still be added to your history.