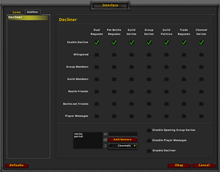 Save your options account-wide or per character.

Blocks sounds and other messages

All the UI clicks, event sounds, and chat/info text that occurs from interactions are silenced when an action is blocked. If you disabled notifications, you wouldn't know if anything was blocked at all.

You will be notified only once within a certain time if a player is repeatedly sending you interactions. The more they send, the longer that specific notification is hidden. Whispers, or amount of times the player bothered you, are in a tooltip on their name in the chat message.

After some time, players that were allowed because you whispered them will be forgotten.

Opening group invites when you need them

Sometimes you need an invite to a world raid group or for a portal from someone nearby. When you say "invite", "portal", or "1" in a public message, anyone will be allowed to invite you. Once you join a group, change zones, or after 5 minutes, invite blocking will return to normal.
You can edit these trigger words, as well as what channels are watched, in the options.

Type /decliner, /decline, or /dcl for the options.

I would appreciate assistance with translation and review of localization if you can help.

Please use the curseforge ticket system to report bugs, issues, or offer suggestions such as an interaction you want to see supported or changing how the addon works

If you prefer something friendlier than tickets, or want a discussion instead of a ticket, I occasionally check these threads:

Decliner is only hosted on Curse and WoWInterface