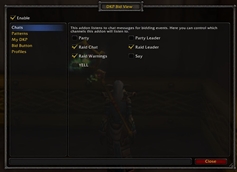 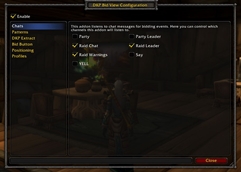 This is an WoW Classic addon which shows you the status of a DKP bidding currently taking place in the raid chat. It lists all the current bidders participating ordered by their current bid. 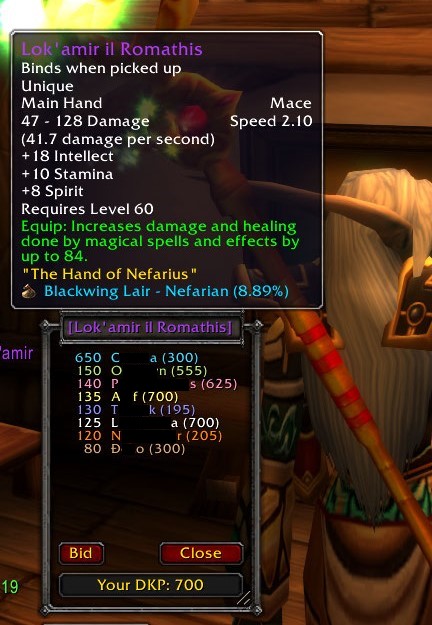 Bidding is tracked by certain pattern matchers who are monitoring the raid chat. The addon listens to the chat and acts when certain messages are found. Once a pattern for "bid started" is found the window will pop up. On "bid accepted" messages the bid window will update itself with the latest bid. And on "bid closed" the window will disappear on its own.

The first message is opening of the bid. At this point the DKP Bid View will pop a window open and show you that a bid is going on. The next messages are different bids by players BidderOne, BidderTwo and StupidBidder. The addon will show an ordered list of the valid bids only and ignore any noise. And the last message by LootMaster.

The recognized message formats can be altered, though! This can be done via the addon's configuration UI. It can be found under Interface Options -> AddOns -> DKP Bid View. Under the patterns tab there are the different patterns for every type of message. They are all Lua regular expressions which can be hard to change for someone unfamiliar with them, though. I am thinking of a better way to create patterns.

The addon comes with a Bid button. When bidding is open one can use it to bid for the current item. It sends a chat message to /raid, /party or /say, depending the current status of the player. The sent message can be controlled in the AddOns settings.

As the screenshots show the addon will try to display your character's current DKP. It searches for it in the guild officers' notes. And there is a different patter for that as well.

One can position the DKP without waiting for a DKP bidding to start by typing `/dkpbv show`. Once the window is on the desired position it can be hidden with `/dkpbv hide`.

Stay Up To Date

Updating the curseforged description is a nightmare. So to stay up to date go and read the addon README in GitHub.