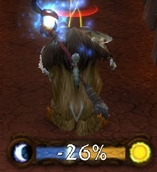 This addon has been created to add some extra functionality to the Eclipse Bar for Balance Druids in Cataclysm. The way Blizzard implemented the bar is quite static. It's not able to move and is locked to the player frame. Also it does not offer much extra functionality.

With EclipseBarPlus we made several changes and improvements to the way the standard eclipse bar works.

You can access the configuration screen for this addon with /ebp. It is also listed in the addon configuration in the WoW interface settings.

The addon has been released. Waiting for feedback and comments. If you come up with a suggestion or bug, please use the ticket tracker. Also we are looking for people willing to add some languages to this addon. Please use the URL at the bottom of this description to do so.

Please enter any bugs or feature request as a ticket on the ticket tracker.

It is simply not possible for us to track all bugs inside the comments on the Curse page, so posting it there might very well cause your bug or feature request to be overlooked.
URL of the ticket tracker: http://www.wowace.com/addons/eclipsebarplus/tickets/

Stuff still to do