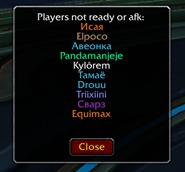 All of <Conscious-Kazzak> (formerly known as Endless) raid addons compiled in to one.

Module for Ra-den Mythic only. Everyone that has this module enabled can see the 3 people affected by Corrupted Existence and shows how much incoming heals they are getting excluding from the player. From a healers perspective they can see if other healers are currently healing the targets to know if it is safe to heal them. For other players that are non healers they will see all healing made to those targets. Makes you yell a marker when affected by resonance and yells a marker and STORM/OCEAN/VOID when holding the relic during resonance. Marks are configured in the settings.

Healers get a popup (movable in combat) that tracks all players cooldowns that are longer than 60s as well as the amount of tailwind stacks each player has to make ensure players have 5 stacks when their cooldowns are coming off.

A) During phase 1 and 3 it will assign all players that are shrunken to another shrunken player and show them the UI shown below. In the UI you can see 5 different colors each 1 correlating to the buttons shrunken players have. The addon tells you who you are assignment is and to target them. Whoever you have as your actual target will get a popup text (that can be customized in the general settings) once you pressed 1 of the 5 buttons in the addon UI, the popup text will contain the color of the button you pressed helping them defuse their robot. You can also target other players and send them information instead in the case that who ever is assigned to help them for any reason can not do so i.e they dc:ed or left their robot too early. The addon is assigning everyone so that everyone has someone helping them so if no mistakes are made you only have to help who ever the addon tells you is your target remember you still have to target them in the game before pressing any buttons. B) in phase 2 there are more shrunken players than there are spark bots so the addon will assign players as they jump in to spark bots meaning first person to jump in gets assigned to the 2nd person, 2nd person assigned to 3rd person and so on, ending with Nth person getting assigned to the first person to complete the circle. Other than that it works the same as in phase 1 and 3. So simply press the button in the addon UI that matches the color above your assigned player head while targeting your assigned player from the addon.

Puts a marker on the person with endemic virus while they are 10 yards away from any player and updates in real time. Also sends a popup message to all healers letting them know.

If you are in a raid and you are either AFK or decline a ready check you will get an ugly looking button that will tell your raid mates that you are ready once you press it. The sender of the ready check gets a list of players not ready or AFK that updates in real time as players get ready and presses the new ready button. There is also a consumable check built in to the ready check module showing you if you are missing food, flask or vantus rune. If you have a flask it shows the duration and if you are a mage, priest or warrior it shows how many players are buffed with the buff of your class.

A popup window that shows when you enter the most current raid asking you which bosses you want to coin. Once you killed a boss you want to bonus loot it reminds you with a popup text that can be customized in the general settings. It also keeps track on how many failed bonus rolls you have so far. Every 7th bonus roll you are guaranteed an item so the addon hooks the bonus roll window and adds a text "BLP(Bad Luck Protection) X/6".

On login a voice reads "You have X amount of unanswered calendar invites" (only counting raid events). If you have no unanswered invites you get no notification.

Tells your druid that you need innervate with a popup on your druids screen!

Makes you create interrupt orders and tells the next person in the order to interrupt with a popup on that players screen.