This is a simple but powerful addon, that allows you to track cooldowns of all nearby players.

When you target a player, that players cooldowns will be displayed.

ONLY ENGLISH CLIENT IS FULLY SUPPORTED. THE ADDON WORKS ON GERMAN, RUSSIAN, KOREAN & CHINESE CLIENT BUT IS NOT FULLY TRANSLATED.

PLEASE MESSAGE ME HERE OR ON DISCORD (Swagkhalifa#5709) IF YOU WOULD LIKE TO HELP TRANSLATE THE ADDON!

To configure the addon, navigate to the interface options, select the addons-tab and select ECDC in the list, or simply type /ecdc in the chat.

Configuration (for versions older than 3.0.0)

In order to configure the addon, use the following slash commands:

The addon has a few “flaws” that I can’t do anything about unfortunately;

If you relog or do the /reload command, all cooldowns will be wiped. This, however, is a design decision.

Q: The addon does not seem to track everything, why is that?

To begin with I made this addon solely for my own use, so the addon is tailored around my own preferences and what I find necessary to track. Also the addon is meant to be for PvP primarily, so all PvE spells such as taunts and threat reduction spells has been excluded. If there is something you feel must be added, then let me know in the comments however I will only consider PvP related stuff for now.

Q: Some cooldown timers seem to be incorrect. Is this a bug?

It could be a bug, BUT I have adjusted a lot of the cooldowns according to talent points and set bonuses that affects them. For example, warriors Intercept has a 30 second cooldown, however the set bonus from pvp gear reduces this cooldown by 5 seconds, and since it is very common for warriors in pvp to have this set bonus, the cooldown is set to 25 seconds in the addon.

You can but you would have to target their pet because it is actually the pets cooldown. A bit inconvenient, I know but it’s not something that I can do much about because there is no way for me to tell through the combatlog who the pets owner is.

Q: ECDC does not seem to track PvP trinket in TBC, why?

It does, but only inside arena. The reason is that Blizzard made the pvp trinket aura hidden, which means it cannot be seen/tracked in the combatlog. Hopefully they will revert this change at some point as it doesn’t make any sense, but untill then we just have to live with it.

All suggestions are welcome but as of now I probably wont be making too many changes aside from performance improvements if necessary.

Please reach out to me here or on discord (Swagkhalifa#5709) if you would like to help translate the addon. Thanks!

Shout-out to Daggith/Daggie from the realm Korgath, for all the work he put into the original addon! 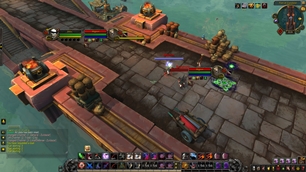