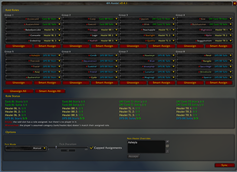 4H Assist (ingame: /fh) helps coordinate raid positioning during the Four Horsemen encounter in Naxxramas Classic. Every player in the raid is assigned a role, which determines where in the boss room the player should currently be, based on the number of marks that have gone out.

Everyone in the raid gets assigned a role, which they can see in a map window (see screenshots). The window contains:
* A map of the boss room
* The number of marks that have gone out
* A progress bar until the next mark
* The player’s current expected position in the room (as an orange skull)
* The player’s upcoming positon in the room if it changes next mark (as a blue skull)
* The number of marks the player has for each boss
* The current (in green) and upcoming (in gray) tanks for each boss (and the boss’s current target in orange if neither of these), along with their stack count for the mark of the corresponding boss
* A tombstone icon if the boss is dead
* A list of players who should be at the same position, colored red/green based on range (~20yd)

The raid’s roles are assigned by a single person using the other main addon window (see screenshots). This window contains:
* A list of all forty raid slots, divided into eight subgroups. Each slot shows the player in that slot, the currently-assigned role, and an icon indicating sync status – whether that player has auto-confirmed the role they’ve been assigned.
* Buttons to unassign roles from the group or entire raid
* Buttons to smart-assign roles from the group or entire raid (see below)
* The status of each role, so you can see if your assignments are good to go
* Options (see below)

The addon is initially configured such that that groups 1-4 contain the tanks and healers, with two tanks and three healers per group, and groups 5-8 contain the DPS, but this layout can be updated and persisted to suit your raid’s needs. Smart assignments help assign the specific roles in each group (mostly important for tanks/healers), since it’s a pain to control the specific order of players in a group – just the proper people in the group, click “Smart Assign”, and the roles will get shuffled around to properly match. Tanks are recognized from the “Main Tank” raid role in the default UI, and healers are hard-coded based on class (druid/priest/paladin/shaman). If you have any players of those classes that aren’t healers, you can enter their names in the options section so they get considered as DPS instead. If you don’t quite have eight tanks or twelve healers, you can assign any role to anyone by unchecking “Capped Assignments”.

You use the addon via these steps:
1. One person opens the assignment window via “/fh start”.
2. This person assigns everyone roles and then clicks “Sync”.
3. On everyone’s screen, the map window appears with their designated role.
4. The assigner repeats this process until satisfied.
5. The assigner clicks “Start” in the assignment window, which closes it and locks in the roles.
6. In practice mode, the assigner then controls the marks. In live mode, the addon looks at the combat log.

Only the assigner has to do any work – for everyone else, the map window auto-opens with the appropriate info and updates during the encounter.

The addon supports practicing everything, to help folks get a feel for the addon and the positioning. You can practice in three ways:
1. Just opening the map window yourself (“/fh show”), selecting a role, and manually advancing marks.
2. Opening the assignment window and practicing with your entire raid – you can choose to have marks advance manually or based on a timer.
3. Opening the assignment window when ungrouped – the addon supplies fake data for the other 39 people, so you can practice assignments yourself.

The addon integrates with DBM if installed:
* In practice mode, each new tick is announced.
* An alert will show when you’re supposed to move on the next mark, and again when that mark goes out. There’s also an alert if you get 4+ stacks of any mark.