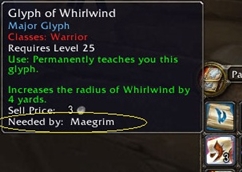 Get
Download Glyph Reporter (1.6.7 release) for world of warcraft version 6.2.0?

Ever wish you could remember which of your alts needed which Glyphs?  That's the question Glyph Reporter answers.

Glyph Reporter manages what Glyphs are needed on a realm-by-realm basis.  When a Glyph is hovered over , the tooltip reports any known characters needing that glyph.  It makes inscription disbursement quick and easy.

I plan on adding more robust features as time permits, including a character purge feature and addon options like text color variants.

Starting version 1.3, Glyph Reporter should work regardless of which language it's installed on.

Due to some issues with how Regions are handled since WoD came out, there isn't a good way to tell what Region your server is programatically.  I can check the Region WoW was installed in but not the server's region.  So, to get around this, I implemented a new setting in the Interface/Addons tab.  In there, you can toggle between US and EU servers.  If you are having issues with connected server characters not showing up, try checking that setting to make sure it matches the server you are currently logged in on.

Essentially, doing things this way allows me to support people that might play on both EU and US servers. 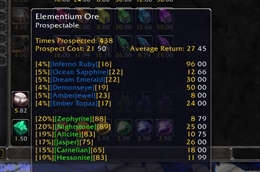 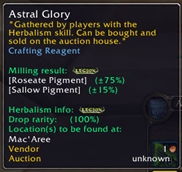