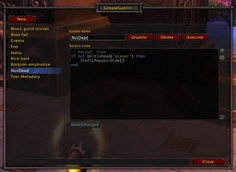 Grease Goblin is an Addon that makes writing and distributing small Scripts quick and painless. You know the Firefox Add-On Greasemonkey? Yes. It's basically just like that.

Grease Goblin uses a similar markup as Greasemonkey at the beginning of every script to define when it gets run. This markup is very simple, but cASe-sensitive. Any databases, markup and API are kept as static as possible, so that if you write a script, it will not just stop working when you update the addon.

By the way: There is a chat-command /ggb or /ggoblin to open a (resizeable) configuration window only with the Grease Goblin dialog.