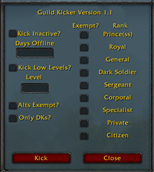 This Menu can be accessed through your Who List when opening your Friend List. It removes members from your guild based on criteria you set. You can kick people based on number of days offline or level, or both. You can also apply exemptions to alts, or certain ranks.

1. Kick by Level – Guild Kicker will kick members that are below a certain level based on criteria that you set. This criteria can be from level 1 to 85. All guild members that are at or BELOW the level set will be kicked unless exempt. (see below)

2. Kick by Both – If selected Guild Kicker will kick members that meet BOTH level and inactivity criteria that you set. Which means they need to be a low enough level AND offline for a long enough period before they are kicked.

3. Exemption by Rank – Guild members will be saved from kicking if they are of a rank that you have set to be exempt. Guild leaders are automatically exempt, as well as ranks equal to or greater then your own.

5. Exemption by Either – If rank and alt exemptions are used, Guild Kicker will NOT kick members that meet either exemption criteria. Which means they do NOT NEED TO REACH BOTH to be saved from kicking.

6. Exemption by DK class – Only DKs that meet all the criteria will be booted (for booting a lvl 55-58 lazy DKs)

7. Confirmation Dialog – After initiating a kick, you will be met with a Confirmation dialog that will tell you how many guild members will be kicked should you confirm your selection. Also a list the members in question will be listed sp that you can review it to see if you have made a mistake or wish to change your settings.

Created by Yottabyte.
Repaired by Darkblizzard.