GuildRosterDeluxe is meant to solve the following common issues with guild character management.

This addon presents four views of the guild roster. Simply hover the mouse over the icon/text ("Guild X/Y") on your LDB host bar and the last view you were on will pop up like a tooltip near the mouse. If you've never heard the phrase "LDB host bar" or after installing this addon you don't see "Guild X/Y" anywhere on your screen, then I recommend you also install the addon ChocolateBar Broker Display.

The first view is the standard "who is online right now".

The second view shows characters that are members of the same raid team grouped together regardless of whether they are online at the moment. A character can belong to at most one raid team.

The third view shows all of the mains in the guild, one per line.

The fourth view shows all of the characters in the guild, one per line. This lets you see all the information about each character individually, like in the default guild roster UI from Blizzard.

In every view, each column is sortable up or down by clicking on the column header. The Note column is a special case in that it expands/contracts each time you click on it. See below for how guild notes are used to encode additional information for this addon.

Clicking on the icon/text ("Guild X/Y") in the LDB bar performs the following actions.

Once a view is displayed, clicking on the title bar in the tooltip performs the following actions.

Clicking on one of the column headers will sort the view by that column.

Clicking on an individual line in a view performs the following actions.

So, just install the addon and I'm good to go? Well, not quite. Not all the data for generating these guild views is available to the addon. In particular, the main/alts relationship is not available, nor is membership in a raid team, nor the name of the player, his sponsor (if any), or his guild join date. All of this additional information is optional, and the addon will run fine without it, but it really shines when at least the mains/alts and raid teams information is available.

The addon looks for the additional information from the character note and/or officer note. Many guilds already use the character note to at least show the name of the main, but often the note is also filled with other funny stuff that is not easy for an addon to interpret. So to make best use of this addon, it requires either the character note or the officer note (or both) be reserved for storing data in a specific encoding format described below.

By default the addon will look only at the officer note, but see below for how to configure the addon to use the character note instead.

For the one character that will be the main for a player, the encoding tokens are as follows.

For every alt character of a player, the encoding tokens are much simpler.

So you see there is a bit of busy work required to set up the guild notes with these encodings, but that is a one-time deal. After that it is straightforward to keep the notes up to date as characters are added and removed from the guild, or join and leave raid teams. Officers just need to modify the guild notes appropriately to reflect the relationships.

The addon itself has an option that performs consistency checks to make sure all of the notes are syntactically correct, and that alts point to valid mains, sponsors point to valid mains, etc. Whenever you bring up a view it automatically runs these checks as part of its process of building its data structures. You'll know instantly whenever something is out of whack (like if a main leaves guild unexpectedly, you'll see warnings that all of their alts no longer have a main). It is strongly recommended that the guild master and those responsible with maintaining these per-character encodings always enable the "Report Malformed Notes" option in the configuration panel.

Note that there is no external database of information associated with this addon. All information about the relationships are encoded in the notes of the character itself, so the data is stored on Blizzard's servers. The addon pulls this information via the guild roster API and then constructs the views on-the-fly. Any officer can change a guild note and it will be reflected the next time anyone pulls up a guild roster view.

Lets say my guild roster has five members with the following relationships.

The following is what you would set in the guild note for each of these characters.

If instead you prefer to use the player note of the character to encode these relationships, the guild master should add the following block of text to the Guild Information. It can be placed anywhere.

Or to specify that both the player note and the officer note should be used. In this case you can spread the encodings between the two notes in any order.

Finally, in order to conserve space, one of more abbreviations for raid teams can be listed inside the <GRD>...</GRD> block of text. For example,

Then, in the example above, Zuno's and Zizu's encodings can be shortened.

Note that there can only be one <GRD>...</GRD> block of text, so if you want to specify the note(s) to scan as well as abbreviations, put them all in one block. 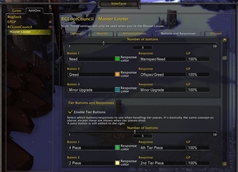