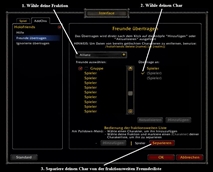 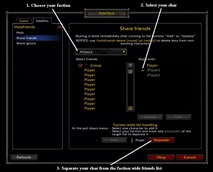 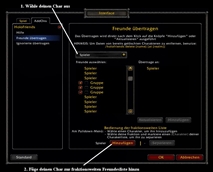 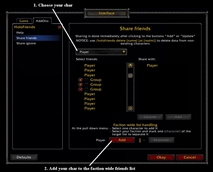 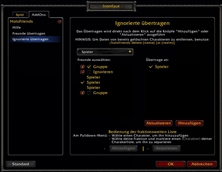 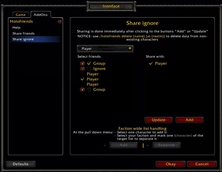 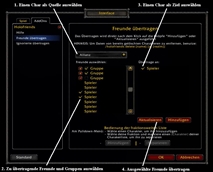 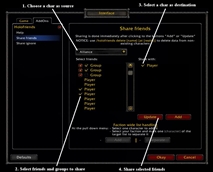 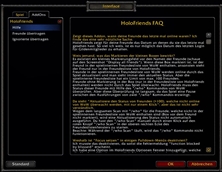 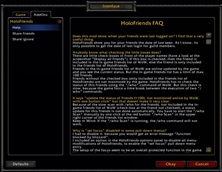 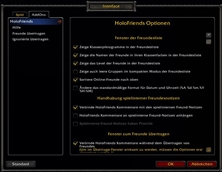 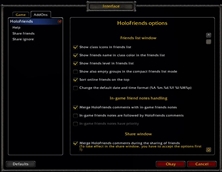 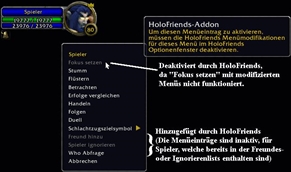 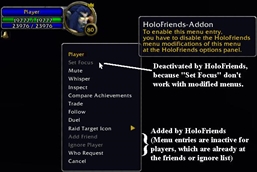 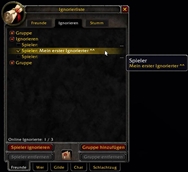 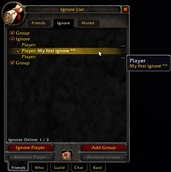 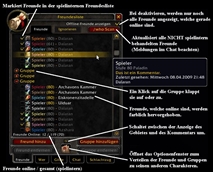 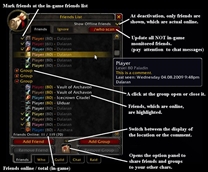 Translation of this page to: (deDE)

This addon implements an extended friends window in WoW to offer you a better management of your friends and ignores.
For an overview and some help have a look at the screenshots: https://wow.curseforge.com/projects/holo-friends-continued/images

New features in this version:
Compatibility with WoW Version 8.0
Andymon

You would like to have HoloFriends at your language?
I'm looking for translators to HoloFriends and the WEB page content.
Send me a note at curse, if you want to join the team as translator. The translations are easily managed with a WEB interface.
Public translations at curse are closed.

Important note for Asian clients:
If you drag a RealID friend for the first time in the HoloFriends friends list to move it to an other group, you are ask to type the name of the RealID friend.
Asian names may need a trailing space at the name.
Thats, because EU and US names consits of two parts, the given name and the surname. Both parts are separated by a space at the server. Some Asian names have no separate part, but the server require the space as separator to the not used surname.

Q: It says "update the status of friends (>100), not monitored online by WoW, with one button click" but that doesnt make it very clear.
A: Because of the slow scan with /who for the friends, not included in the in-game friends list of WoW (check-box at the friend not checked), a status update for this friends is not done automatically. You have to start the "/who Scan" manually by one click at the red button "/who Scan" in the upper right corner of the friends list window.
Keep in Mind: If the "/who Scan" is running, the /who command will not work.

Q: Why is "set focus" disabled in some pull down menus?
A: I had to disable it, because with normal menu modifications you would get an error message "function blocked by blizzard".
The setup of the focus seem to be an overall protected function in the game. It is a feature of the game, that protected functions don't work, if there is any unsigned modification of its appearing window, in this case the pull down menu.
Thats, I included options in the HoloFriends options panel to disable the menu-modifications of HoloFriends, to enable the "set focus" pull down menu entry.
Optional I included a new method to modify pull-down menus without this problem (called tainting). But this methode uses basic menu functions, which could get changed or protected in the future. Thats, the default methode is still included.

Q: Why is in a raid in combat the raidmember window empty, if HoloFriends is loaded?
A: This should not happen anymore, because HoloFriends now uses its own independent window.
It is a feature of the game, that protected windows don't work in combat, if there is any unsigned modification of its appearing window.
The raid-window is part of the friends-window, where also the friends list window is a part of it. The friends list window was in the past modified by HoloFriends. And HoloFriends is not signed by Blizz.

Q: Is there a way to keep the groups and membership in those groups in sync across your alts?
A: Yes.
You can use a faction wide friends list for some or all your alts, where all this chars using the same friends list in HoloFriends. Also the online friends list at the server is synchronized.
Or you can manually sync single groups of your alts.

The addition to the faction wide friends list and also the sync of single groups is accomplished at the share frame of HoloFriends. You find it over the lowermost middle button at the friends list window or by navigating to "Main menu -> Interface -> Addon's -> HoloFriends -> Share friends".

To share/update a group with other chars of you, select the origin char from the pull down button on top of the lists. Mark the groups to share at the check button of the group in the left list. Mark your destination chars at the right list, and click at the "add"/"update"-button below the lists. "add" only add not existing friends to the groups of the destination chars and "update" synchronice the data of all friends of the selected groups with your selected destination chars.
There is an option at the HoloFriends options panel, which allow to mark removed friends at the origin group in the group of the destination chars. Friends are moved to other selected groups automatically, but not removed from the groups. You have to remove it manually.

Q: Thanks for the intro. Will this also keep the groups and members in sync or will i have to follow this proceduce each time i add a member to a group and or create new groups? It would be great if there was an option to keep these in sync without the "update" process you described.
A: The faction wide friends list feature of HoloFriends is what you are looking for. For its use, see the description above.

If you are using the normal mode with single friends lists for all your alts, you have to share the group in the share panel of HoloFriends to your alts. If one friend in the shared group was removed, it is optional only marked (strike through) at the friends lists of your alts, but not removed. You have to remove it manually after login to your alt. (Thats, to allow the support of other addons.)

Q: Is there a way to automatically sync your friends lists or a way to select all the names in the manual sync? Unless I am missing something, I've only been able to sync by clicking on each individual name one at a time.
A: You can also share whole groups by checking the group. After checking, the group is collapsed, but has still the check-box checked.

Q: My other friend list addon don't work like expected if I'm using HoloFriends too. Is HoloFriends not compatible?
A: Yes / No
HoloFriends should be compatible to other addons, if you are using single friends lists for every char of you.