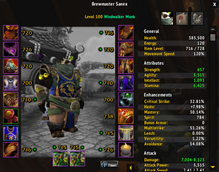 Shows equiped items itemlevel on Paperdoll frame view, nothing more, nothing less. , , these days the addon can show you missing enchants, gems and upgrades and also supports Inspect frame and has only little bit of fancy stuff (Average itemlevel on InspectFrame is extra fancy).

I know there are 13 of these addons in a dozen, but this is my version. While leveling I wanted a quick and easy way to see what itemslot I had the item with lowest itemlevel equiped so I wrote this small addon without any extra features to keep it simple and light and added features along the way while trying to keep the original vision.