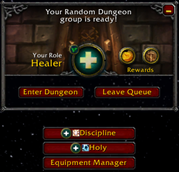 Are you tired of forgetting to change spec to your assigned role before entering? This addon will add buttons below "dungeon ready" dialog that would allow you to quickly switch to other spec that matches your assigned role.

Instead of talent/spec group switching you can now just switch directly to any specialization and despite what I vaguely remember being promised by Blizzard, you're NOT put into correct spec automatically when you queue as role that do not match you current spec – so InstanceSpec HAVE work to do after all!