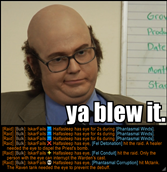 Shadow-Lord Iskar in Hellfire Citadel is just one of those fights. The Eye of Anzu is a relatively unique mechanic that's easy to mess up. And if you mess up, you've probably wiped the raid.

And, most frustratingly, it's not always easy to figure out what went wrong.

For example: a couple people got pushed off the edge. Joeshmo had the Eye of Anzu last, was it his fault they died? No, he had just got the Eye. Okay, who had it before him, were they the ball hog? Or was it someone earlier in the chain? And so on. Argh.

IskarFails makes it easy to tell what happened. In the spirit of the old FailBot and EnsidiaFails addons, IskarFails will immediately and mercilessly call people out when they fail at mechanics.

Disclaimer: The goal here is to help raids down the boss with fewer deaths. If you've been called out by someone running this addon, don't take offense. Take it as a challenge to improve your play.

Also note: This addon is not a replacement for boss mods like Exorsus Raid Tools, IskarAssist, DBM, BigWigs, etc. Those addons help you to actually handle the mechanic. IskarFails only announces mechanic failures after the fact.