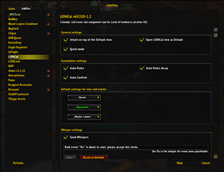 LOIHCal is in game raid event signup role management addon created for guild <Lords of Ironhearts> of Arathor EU, but can be used by anyone. Addon was designed to be easy and fast to use with every button and action being (almost) self-explanatory.

This is only short memo on changes, and doesn’t include all changes and fixes.

How to use it?

This describes the usage of the LOIHCals own view on raid events.

In the old style you pre-select the role for players and then start moving them into that rolelist until you change the role to different one.

In Quick Mode you don’t pre-select the role by clicking the titles of the rolelists, but you select them on the fly by using you keyboard on mouse.

Under roles tab you can check and alter the Auto-Roles LOIHCal has recorded.

Use /loihcal or your own translated slashcommand to list available parameters like config to open LOIHCal config or reset to reset database and reload UI.

You can find config under Interface -> Addons -> LOIHCal