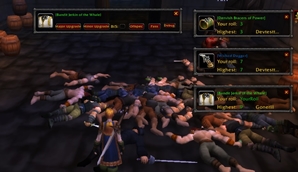 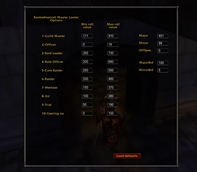 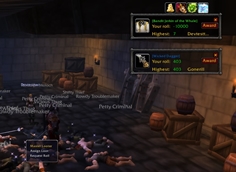 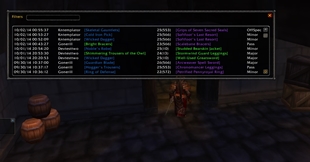 LootByRanks is an addon allows the master looter to set custom roll ranges for each rank in his guild for use in guild raids, adjust rolls based on importance of an upgrade and keeps a history of rolls and awarded items.

What is the benefit of custom roll ranges?

These roll ranges may, but do not have to overlap. Intended use is to give core raiders a slight edge when rolling, while lower ranked members still have a chance to win loot if they roll well enough. This makes a compromise between DKP systems which can lead to new members being unable to get loot if decay is too low, and the built-in need before greed, which lacks ways to recognize the different levels of contribution and dedication between core raiders and for example trialists. Depending on your current way of awarding loot, RLR may save your raid a lot of time.

Any other reasons to be using LBR?

In addition to allowing guild rank based roll ranges, RLR also allows different types of rolls according to the importance of the upgrade (major/minor/offspec upgrades each have different ranges, rolling for best in slot can be set to give the rolls a custom bonus) This allows people to more easily roll for minor upgrades when in doubt whether there is anyone else who could use the item – if the item is a major upgrade for someone else, he will have a much better chance to get it.

What are the requirements?

If a guild decides to use this addon, all of the raiders need to have LootByRanks installed, otherwise they will not be able to send their rolls (which are not made by using the standard /roll feature).

When roll requests are made by LBR, they are sent to the master looter, whose addon interprets them according to his settings and sends the results to the raid channel. This process was made to make it more resistant to cheating attempts-as far as I know, the only person who could try and "cheat boost" their roll is the master looter and it would both require a significant amount of effort and be immediately visible.

How do I operate this?

LootByRanks UI is started by the slash command /lbr or if you have an addon for displaying  LDB plugins (like Bazooka/Titan Panel/etc.), by clicking its icon. From there you can enter the options for setting roll ranges, view history of awarded items or roll records, you can also reach them by typing /lbr options, /lbr history and /lbr rolls respectively.

The windows for rolling on items will appear for everyone in raid when the master looter opens a loot window for a master loot eligible item.

Absolutely! This is my first addon, so the code very likely sucks. Even though the addon should have a minimal cpu/memory footprint, I can´t guarantee that there will be no errors. In fact, I´m sure there will be things that crop up, which I will be fixing as I can, but with limited availability at the moment, it might take time. This is still very much in development and I´ m mainly posting this here to make in-guild testing easier.

What is already working?

The core functionality is there. The addon:

detects master looter, establishes/joins a custom comm channel based on the ML name , looting items that should be handed out via master looter triggers loot windows with LBR rolling buttons which reflect the guild rank of the roller, guild ranks are loaded and stored, along with their respective values (the table with values can be found in \savedvariables\lootbyranks.lua and edited in the options panel, otherwise the addon will be using default values created by a formula), loot and roll information is saved.

What is not yet implemented?

Automatic version check is planned to show who is running current/obsolete version of the addon and does not have it running at all (to prevent the awkward situation after the first boss is already dead and someone can´t loot), pushing of settings updates guildwise/raidwise, enabling/disabling the addon on demand, mouseover tooltip on roll windows showing all rolls made on an item.

How to reach me?

I´ m Gonerill from Frostmane EU, feel free to poke me ingame or send tickets here via curseforge, I will try to reply if I can, but might only be available during weekends.