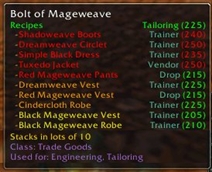 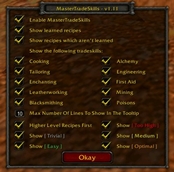 This addon is an information tool for all you trade skill loving fools! It will alter the tooltips of ingredients and tells you the following things:

It shows recipes where the selected ingredient is used in

It shows 'where' you can get the recipe (vendor, quest, etc.)

It show what tradeskill level is required to use the recipe

It will show the skill color of the recipe. Or shows it in red if you don't know it yet

It will save everything between sessions per character

Adjustable options. Show what skills you want to see. Show only learned or not learned recipes.

Master Trade Skills uses the database from ReagentData, ReagentData is a comprehensive library of all reagents used in tradeskills in World of Warcraft.

To use Master Trade Skills, just install the addon in your interface directory. To let the addon know what recipes you know you have to open all your tradeskill windows first (tailoring, first aid, etc.) Next time you hover over a ingredient you will see the recipes in the tooltip.

You can use the following slash commands. (You can use /mastertradeskills or /mts.)

/mts help This will show you a little help

/mts on This will enable Master Trade Skills

/mts off This will disable Master Trade Skills

/mts toggle This will toggle Master Trade Skills on and off

/mts options This will allow you to change the settings

No idea why this mod slipped into non-existance, so i dragged it back kicking and screaming – if you wanna flame me for doing you will be ignored at Triadian@Gmail.com i will only be updating

any nice suggestions or improvements let me know and i'll try and implement them but my knowledge of UI isn't that brilliant.

German Localization by Farook. Thanks