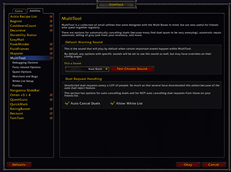 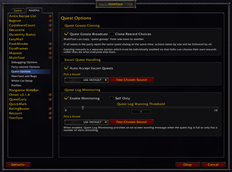 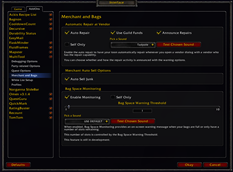 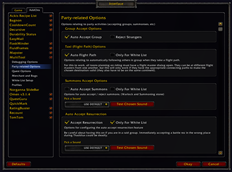 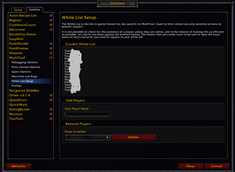 I’ve taken a year off from WOW and from addon stuff but I’m back. I’ll be updating MultiTool shortly

MultiTool: A set of tools aimed at making WoW just a bit more user-friendly, and is especially useful for friends who group up and quest together. It used to also focus on MultiBoxers (people who play multiple accounts at the same time), but changes in Cataclysm (mostly involving widespread use pf so-called phasing) caused me to give up multiboxing, and realistically, many others did so as well.

I still find this addon to be darn useful, so I am maintaining it.

v6.0.2.000 is the current version as of October 2014 – I will be testing the various features out for bugs/issues as soon as the patch hits on October 14

Changes in 6.0.2 WOW include some heafty changes to bag management – I don’t THINK my addon will be affected but I’ll be checking the bag count/warning and any other features to ensure they’re not broken

v0.5.1 is an old version. I found and fixed some annoying gossip option issues that were causing city guards, multi-profession trainers and other NPCs with multi-level dialogs to jump forward in dialogs. I also improved the “Try to use Guild Funds for repairs” by putting in better checking to ensure that you only try and use the funds if you’re allowed, if your guild has enough in the bank, and if your daily limit allows your current repair bill.

v0.3.02 is an old version… there was a report of a possible bug in the Taxi Follow function, but I was never able to replicate. Please use the latest version and if you encounter problems, let me know.

Patch 3.1 caused the auto accept group functionality to end up declining even when the settings were for acceptance. PLEASE update to the latest version on Curse.com if you’re having troubles.

There are quite a few Multi-boxer specific addons available, but I never liked having to rely on the master being party leader or having to specify a master in the options somewhere. It leads me to stuff like clicking quest gossip options on a “slave” and getting everyone out of sync. To solve this, I came up with a “masterless” way of sharing flight paths and quest gossip.

So, when you want to take a flight path, you just open the flightmaster with all your toons then pick path with whichever toon is handy. They will all follow. It even works if youre all in the same continent but at different flightmasters… as long as they can all get to the node you target, they will all fly even if they were in different zones. (but only on same continent)

As someone who dual / triple boxes all the time, I have found a lot of little bits and pieces in the addon world that help take some of the drudgery out of multiple invites, turnins, quest gossips, yada yada. Often times, I find I am installing a whole addon just for one small feature, leading to a lot of overhead.

Enough is enough. This addon was inspired by Smurfy’s MultiBox v2 which has a great collection of really useful stuff. If MultiBoxer was Ace3 or used a more lightweight approach, I’d probably just contribute and/or make a fork. Instead, I’ve decided to try my hand at a ground-up, exactly-what-I-want, lightweight Ace3-based addon.

For full documentation and change log, please visit the project page at WowAce

I’ve got a LOT of little things I’d like to do with this addon over time. Some of these may be impractical or not really end up being what I wanted. They are listed here somewhat in the order I want to build them in.

NOTE: Due to some abusive addons in the past, Blizz completely protected the AcceptTrade() function from addons being able to run it, so AutoTrade is dead in the water. Just bind a key to a macro with /script AcceptTrade();

NOTES
There are probably many things I can’t think of at the moment, but this is a good wish-list.

If I can figure out a way to do it, I may set this up as individual modules so that one can quickly enable/disable parts they want or don’t want to save performance and to try and isolate the parts from each other as much as possible