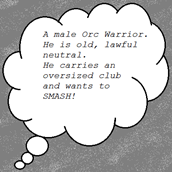 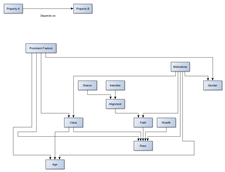 Have you ever been in a situation where you really needed a random generated Non Player Character (NPC) Description? No? Well, in case you change your mind, npcGenerator is a tool for Dungeon Masters (DMs) or normal Roleplayers (RPers). It will, on demand, generate a description of a randomly generated NPC. This will include names, it's gender, race, motivations, prominent features, alignment, race and potentially many more things. The user will be able to modify these, and print the npc to the chat.

Just /npcG and get started* ;)

npcGenerator generates traits that together make up an npc. These traits are currently:

These traits can be rolled all at once to create an npc, or you can reroll single traits if they are not to your liking.

And if you REALLY, REALLY want to have a Goblin that is currently holding a pink bomb while riding a golden shredder… All the traits are put into input fields, so you can write your own in those! (Writing custom values in them might make the rerolling of traits a bit funky, as "Ghost Crab" currently does not have any names attached to it. Please do not post an issue on it not returning "Greg Street" now…

Once you're done, press print, and voila, your group gets a first glance of the npc! (They learn of the name, the race, class, feature, tribe and age. The other things are not visible on somebody after all)

In addition we extended the use of the substitution sequences. World of Warcraft defined %t and %f, we added some more (they only work in the addon):

We are very much open to feedback! At the very least there will be many more classes, features, motivations, names, ect. We're also considering to expand the race roster to include some of the more exotic races. Feel free to contribute by leaving a comment, or adding to the wishlist. User-generated data is one of the things we are considering, but there is quite the road ahead before that will be there. Saving npcs is being considered as well, but as with the user-generated data. It's not here yet, and will require some work. Presets are also considered, to generate an enemy, or a bar-patron, or a mage, instead of relying on the randomness fully.

Beta is beta. While we made sure the program is stable (we think***), some of the trait combinations might not be all that feasible just yet. That's why your feedback is highly appreciated. We also have the issues page!

These issues are currently known:

We have a wiki!

Localization is not supported right now, sorry. This might change in the future.

We also have a plugin to send the name straight to TRP3's NPC Speeches window!

* The creators of npcG do not take any responsibility for Goblin, or Gnome related incidents.

*** It cannot be proven that we actually think…