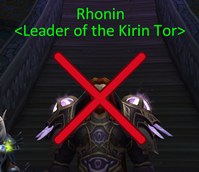 Get
Download NPCIgnore (NPCIgnore-1.1.3 release) for world of warcraft version 8.0.1?

Blah blah blah, yeah? Some NPCs don't know when it would be better to keep their mouth shut. So let's help them by shutting it for them.

NPCIgnore removes all NPC chatter from specific NPCs in chat. It cannot remove the audio related to the speech though since that is not doable within WoW API.

If you wish to completely mute Rhonin I suggest getting STFU Rhonin! addon in addition to NPCIgnore.

By default the addon ignores some NPCs:

If you wish to ignore or unignore NPCs you can do it by typing /npcignore npcname. To view currently ignored NPCs type /npcignore list.