Currently not able to deliver updates or new features. Maybe check out https://www.curseforge.com/wow/addons/spy-classic which looks more mature and well developed (Check out Kill On Sight feature)

Put unfair gankers that killed you while you were fighting a mob on a list. When you see them again later, the addon will play a loud sound and prints a message to the chat.

You can add/remove players via context menu (Right-Click on the enemy) or use commands:

Either use /rev, /revenge or /gank and then the following commands:

/gank export   – Creates a export frame with all names including reasons. Copy and Paste content to share lists

/gank import   – Creates a import frame. Paste a list exported from another user 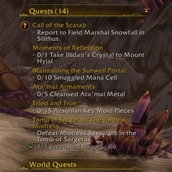