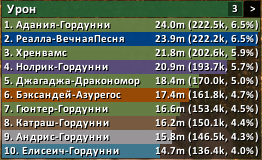 It aims to be as memory and cpu efficient as possible for the data it stores. You can watch a really old version of it in action here: http:www.youtube.com/watch?v=f_yoYs0teSo. The code has been rewritten a lot since then, but the appearance did not change too much.

Not Supported and probably won’t be included in the future

The navigation system is mainly inspired by Assessment, which is also used by the Skada Damage Meter addon. The basic idea:

The first layer of navigation shows all fight-segments to choose from (also “overall” and “current fight”), leftclick one to view all available Modes. After choosing a Mode by leftclicking it, you can see the first overview. Left-clicking further will give you more information about the selected item as long as there is something else available. Right-clicking anywhere will bring you back to the previous layer. You can always go back directly to the segment-selection layer by clicking on the “current viewed segment indicator” in the topright corner of the window.

Unfortunately none of the options to customize the appearance of the main window can be found ingame. They are only available to you if you know how to use an editor to open the Config.lua file, found in the addon folder. I think every option there should be pretty much self-explanatory. And in case you where wondering why nothing happens when you change the “pos” option in that file: Once you used alt+leftclick drag to move the window, the coordinates are being read from the savedvariables. In order to use the ones in this file again, you have to delete the character-specific savedvariables for Numeration or use chat commnad “/run NumerationCharOptions.x = nil NumerationCharOptions.y = nil NumerationFrame:SetUserPlaced(false)” and reload after it.

Obviously i’m trying to improve it even further, so if you have any bug reports or suggestions, post away, but no promises on implementing features fast (or at all if I don’t like them ).