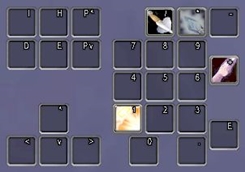 Due to the lack of spare action slots for druids and [classic] warriors, slots of bottom action bar #2 are used to store numpad actions in. For moonkin druids, the entire bottom action bar #2 is used. For warriors and feral druids using arrow keys, only the rightmost 4 slots are used.

NumPadBar is an action bar in the shape of a numpad. It works like a built-in action bar such as the Bottom Right ActionBar, for example. You can drag actions and macros into and out of NumPadBar, just like other action bars.

The first major difference between NumPadBar and built-in action bars is that it is in the shape of a numpad. Also, keybindings for numpad keys are already set up for the numpad bar. These keybindings are temporary and are only used while the numpad is displayed.

In the heat of combat, it is all too easy to accidentally drag actions out of action bars. Therefore, NumPadBar, as well as the built-in action bars, are locked during combat. This prevents all changes to NumPadBar during combat.

You can display instructions in a scrollable tooltip by right-clicking the invisible background of NumPadBar near the numeric keys and selecting Help.