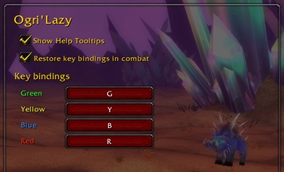 Apexis Relics (as well as Apexis Monuments) around Ogri'la plateaus have you replay a sequence of up to 10 notes – but the sequence is easily forgotten, and writing it down is cumbersome (besides, that takes effort!).

The question remains: are you lazy enough to get Ogri'Lazy? … Of course you are. Once you've downloaded the addon, you can type /ogri config to configure it to your liking, and /ogri to test the interface without interacting with an Apexis relic.