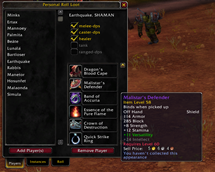 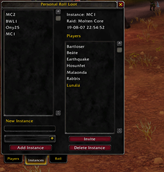 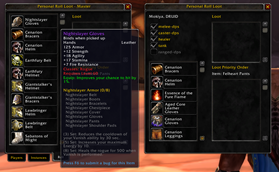 One of the biggest problems of WoW classic I can remember was Loot-Drama. Who should be entitled to what? Everyone has their own views of fairness and if you add all aspects of the game, such as: roles, off-specs, twinks, raid loyalty, character reroll etc. it can quickly become very complex.

Those who spend some time studying different loot systems will find out that each one comes with its own advantages and disadvantages. Searching for the right loot system, the “modern” WoW has evolved the proven “personal loot” system. There is a good article about “Personal vs. Master Loot for BfA”, which concludes that “Personal Loot” has only a very small effect on “Team Progression”.

Since there will probably be no “Personal Loot” in WoW – Classic, I decided to simulate the loot system based on “Master Loot”.

For those thinking of using a DKP system, I can highly recommend reading the following articles:
https://wow.gamepedia.com/Loot_system
https://en.m.wikipedia.org/wiki/User:Saraid/DKP

How does it work:

In contrast to the conventional dice (/ rnd), the chance of receiving an item does not diminish as the level of equipment increases.

The reason for the reward of commitment is understandable and tends to be desirable, but the quantity and quality of the reward by means of points or items is doubtful. This loot system is not about finding the “right” player, because the premise is that there is no “right” player. You have to see the system more or less like a /rnd with a higher chance for good equipped players to get a specific item to compensate the higher chance for bad equipped players to get any item.

I am currently working on the development of this add-on to support the loot award and am grateful for any feedback.

Why not just take the obvious dice (/ rnd)?

The simple roll has one major drawback: the chance to get an item that you need is getting smaller and smaller as your equipment progresses. You pass for everything that you already have and then you also have to roll for the few items you still need with all the others in the raid.