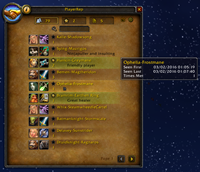 As you group up with people, PlayerRep will keep track of those players.

These players will be saved for a certain amount of time (default 24h) after which they will become hidden.
You can star a player for their good behaviour or skill or choose to add a note to remember them by.
Starred and players with a note can be found in their own tabs.
When you group up with a player you have met before, starred or given a note, a pop-up will let you know.
All players you meet,star and note will be shared between all your character, on both factions and across all realms in the same region.