PotButton creates a macro button, called Pot, that allows you to set four different items to it. Using the button will have your character use the item either set with no modification or the item attached to when you're pressing ctrl, alt or both.

Additionally, you may use /potbutton to bring up the config menu (also available via Interface -> AddOns -> PotButton), which allows you to not only set the item to be used by the button combinations, you may also set backup items, should the item not be available in your inventory at the time.

Resetting your character's items back to default can now be done with the slash command /potbuttonreset. Do not worry, this will only affect the currently logged in character's items and not any items on other characters. The default has now been set up with the entire list of potions, in order of strength, to be used as the non-modified click, so immediately the strongest potion your character has in his or her bags will be the item the button will use. 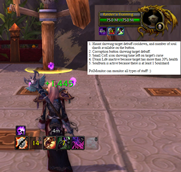