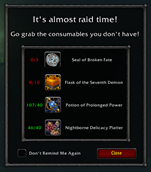 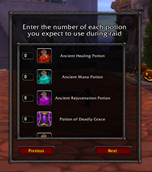 This addon isn't just a (hopefully) useful tool, it's also a school project that requires user feedback. Leaving a comment on your thoughts is extremely helpful!

RaidR is a simple addon that tracks your raid consumables for you. Gone are the days of forgetting to buy flasks until you get into the instance, or porting back to Dalaran to get your Seals while everyone else waits!

When you first log in with RaidR installed, you will be prompted with a window to input the number of each consumable you want to make sure is in your bags before heading off to raid. At the end of this process, you can customize what days and times you raid and how long before raid you want reminders to start.

When raid night comes around, RaidR will scan your bags and let you know how many of each consumable you have and how many you need. This reminder will keep appearing every five minutes until raid time unless you turn it off, just to make sure you don't forget.

You can also have RaidR track your Seals of Broken Fate for the week and remind you about them when a consumable reminder appears. Finally, you can have RaidR notify you if you enter a raid with less than the number of consumables you wanted.

Both the config window and the reminder window can be opened at any time with slash commands, too.