When you target a rare or rare elite NPC, RareCaller will automatically announce the mob to the General channel. For example:

Unlike RareCoordinator and RareAnnouncer, RareCaller is not limited to Timeless Isle, nor does it have a fixed list of rare and rare elite NPCs. RareCaller automatically learns the list of rares as they are discovered (using the UnitClassification() API). It should work in all zones, on all continents, past, present and future.

RareCaller will display a window when a rare is up, showing the mob's name and status (Alive, Health %, Dead):

When a rare NPC is killed, the kill is also announced in the General channel:

Killed mobs will be removed from the list after one minute. If a mob has remained Alive for more than ten minutes, RareCaller assumes you have moved on, or missed the death notification, and will remove it from the list.

RareCaller can communicate the presence, coordinates, and status of mobs to other RareCaller players. If another player targets a rare, it will automatically appear in your list. By default RareCaller will only show rares in the same zone as you. There is an option to be able to see rares up anywhere in the world.

You can use /rarecaller or /rc to access slash commands: 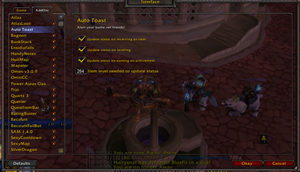