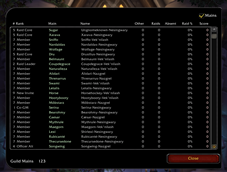 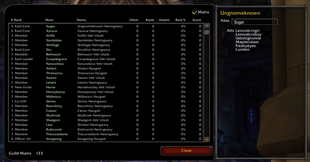 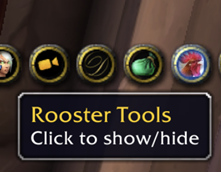 Rooster Tools is a utility used by the Angry Roosters guild to track participation for our raiders. The usefulness of the utility will expand over time but currently has the functionality necessary to track raid and mythic+ groups and score characters based on participating in those groups with other guildees.

Scoring for raids is done based on the amount of time participated after a guild group has been formed. A guild group is defined by default as having 10 members from your current character's guild in the raid or 4 members of a party. These defaults can be adjusted via config.

All groups that have at least 4 members from your guild will be tallied so that guild leaders can see who is being inclusive of other members.

Rooster Tools will display character data by main (alias, guild note, or alt in addon) or by alts.

Each character can be given an alias by simply clicking the character and typing an alias to be known as. This alias will show in the frame for all linked alts.

Alts can be linked in two ways.
1. A guild public note with [MainsName] will cause Rooster Tools to assume an alt and create a mapping. Note that this method will only map an alt if the character's name exists in the guild.
2. While in the Rooster Tools frame you can click on a character and then "Right" click the main of that alt. This link will be overwritten by the guild note.

Rooster Tools attempts to keep in sync with other guild members using the addon about once every 15 minutes. This uses bulk comm buffering to avoid any performance hit.

Request a sync from other guild members using Rooster Tools

In an upcoming release a config window will be provided for now you can adjust a few of the main settings by running these script commands. Simply type these into the chat.

Adjust the Raid and Group minimum guild members to consider the group a guild group.

Be careful – this will cause all Rooster Tools data be lost.
/script RoosterToolsDB = {}

Feel free to post issues in the jira as well as send PR's or ideas.