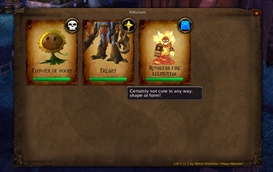 During roleplaying plots, we often encounter additional NPCs in our stories. Be it enemies to kill, townsfolk to trade and barter with, or friendly creatures, which guide actual players to their goals. While we're unfortunately unable to summon actual models into the gameworld, 'dungeon masters' often use raidmarkers to simulate their position, and describe their appearance. This addon's able to display up to eight models inside a window – and their corresponding raid symol, with a name, a health bar, and some short descriptions. This not only helps the players to remember, which of the 'empty' raidmarkers meant what – but the DM too.