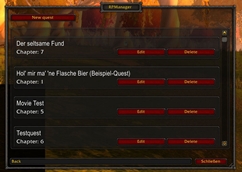 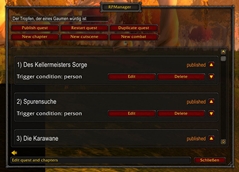 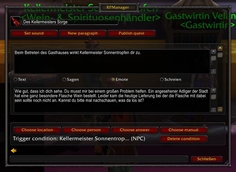 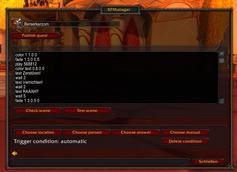 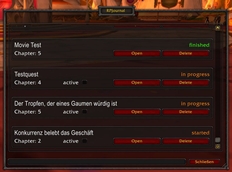 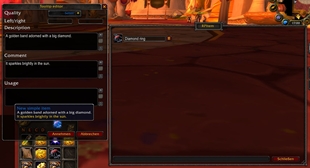 An addon with which you can manage quests and play them with a group just like a tabletop rpg. Quests are broken down in a series of chapters that are activated one after the another by triggers (e.g. entering a location or giving the correct answer to a question). A chapter itself can be a textual description, a small cutscene or even a battle.
The RPManager also includes a dice tool and an environment for creating and managing items.

Write adventures that your players can experience. Accompany them as moderators or send them off alone for a little while.

A quest is divided into several chapters. A chapter in turn can be normal text describing the situation. But it can just as well be a small cut scene or even a combat.

Cutscenes use a simple scripting language to make colors, sounds and animations appear. A dream sequence? Darken the screen and let words and pictures appear. Blood frenzy? Make the screen red and let out a growl.

Choose a battle map and add some opponents. As soon as you present the fight to your players, they are added to the battlefield as tokens and can thus move towards (or away from) the opponents independently. Keep enemies invisible to use them as reinforcements. Or turn them invisible during the fight to show that they are dead or fled from the battlefield.

Each character is equipped with two bag. One is a shated bag for all characters on your account. In this you can build and test your items. When you are satisfied, you can drag and drop them into the bag of the character who is supposed to own the item. Such items can of course also be traded with other players. There are currently three types of items:

Write books and give them a layout dtp like editor. You add text and images as separate fields that you can position and size as you like.

Choose from the existing maps from WoW and embellish them with symbols and lines. Whether directions or battle plan. Simply draw the perfect card!

Having created many items in Gryphonheart Items, I am going to convert them that they are usable in my RPManager.

A tool for conveniently collecting, sorting and filtering all dice rolls e.g. during an RP fight. Invalid rolls can be removed. The rest can be sorted by result. Multiple rolls can also be easily recognized and sorted out.