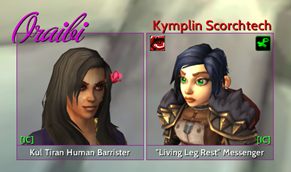 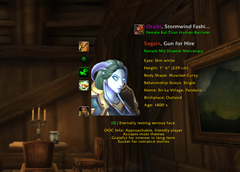 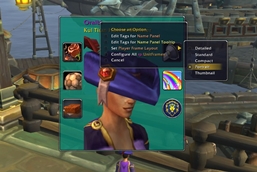 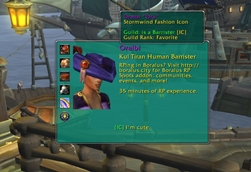 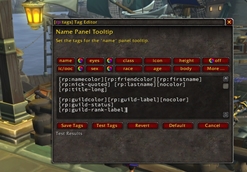 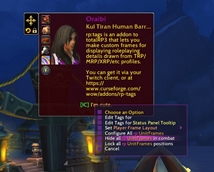 rp:tags lets you create custom unit frames based on fields from roleplaying profiles, such as those used by totalRP3, MyRolePlay, or XRP. This lets you choose which information is most important to you, and display it.

Unit frames are the frames on your screen that display information about specific units — for example, yourself ("Player" frame), your target ("Target"), your focus ("Focus"), or your target's target("TargetTarget").

In ElvUI mode, you can use rp:tags in your unit frames alongside the normal set of tags found in ElvUI.

In standalone mode, rp:tags launches a set of unit frames, called rp:UnitFrames, that you can customize in terms of layout and screen location. There are four panels for tags and six slots for icons, and you can choose which rp:tags to use in those panels.

In parallel mode, both the rp:UnitFrames and ElvUI's unit frames are enabled and can display rp:tags.

A tag is simply a word encased in square brackets; they define what your user interface will show you. All of the tags included in rp:tags start with "rp:" (with a couple exceptions), and they are based on details that other people have set in their trp3, MRP, or XRP profiles.

Tags can be combined, such as in this example: 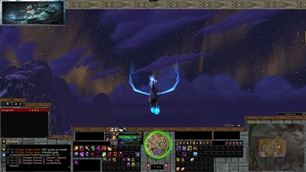 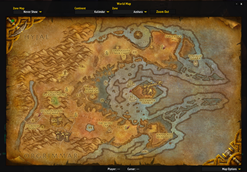 UwU this is so amazing and cool!~ Now I can ERP with all of the addons to see their profiles!
– DJT.