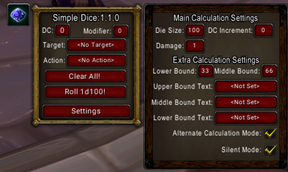 Damage and the DC Increment work together to calculate damage. If you're using a system with no incremental DC then set this to 0.

I define an Incremental DC system as one where you can suceed multiple times from a single roll so long as you pass a certain value over the main DC. For example if your Increment is set to 5 and you roll 25 vs a DC20 then you would do 2 Damage to your Target.

In an event where rolling is split into three categories;

This is a Simple Dice addon designed for RP events and servers. The functionality is fairly basic but should cover a wide range of guilds and events.

The addon will output to Raid chat if you're in a Raid, Party if in a Party and to the Default Chat Frame when you're in neither of the above.

It features a user definable field for;

When rolling the Output will appear as something like.

Note: Both Action and Target need to be filled to get this output. Otherwise you'll get