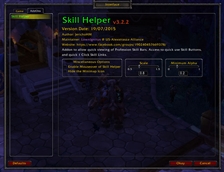 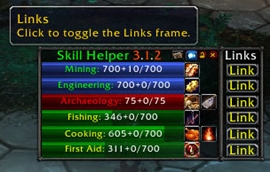 Report bugs and issues at https://github.com/lownignitus/SkillHelper/issues

is an add on that was developed to track skill progression. It will alert you when training is required to increase your cap so you don’t waste time picking herbs or mining nodes without knowing you aren’t getting skill points (among other skills as well to prevent the waste of mats). The addon has its own action buttons that relate to each skill so that you don’t have to clutter your action bars or open the profession window to access these. There is a toggleable frame for 1 click Skill Links, allowing you to link a skill without opening the crafting frame. There are buttons for hiding the SH addon, toggling the frame lock, opening the Links frame, and opening the Spellbook Professions tab with 1 click. A Mini Map Icon was implemented to perform all slash command actions, but the slash commands are still available:

Future development for Skill Helper is still under way. Some features that are planned to be implemented include, but are not limited to:

I only ask you to be patient as I have a wife, college, activities outside game that demand attention, and 13 100’s in my raiding guild. Skill Helper is being worked on actively, but nothing is completed to a point of satisfaction to pass through my own standards. 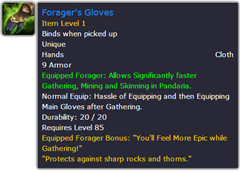 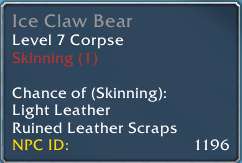 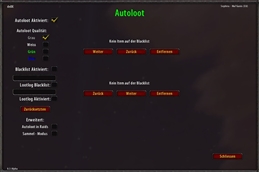 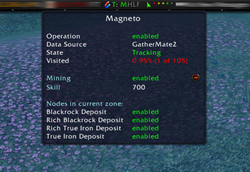