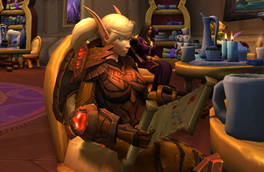 SlashRead, or /read, is the emote that pulls out your map while looking at either a mailbox or the map. I mainly wanted this addon to give the feeling that the character is actually looking at something rather than staring off into space when looking through various windows on the User Interface.
This addon adds the /read functionality to many other frames, including:

What I want to include in the future:
Various AddOn frames such as AtlasLoot and option windows for AddOns.
Some AddOns may be incompatible because they completely overhaul the UI or alter the frame, in which case I would need to make a plugin for it.

Original idea is taken from Lore Library.
—
You can donate to me if you want here so I can continue making AddOns and have greater free time. 🙂